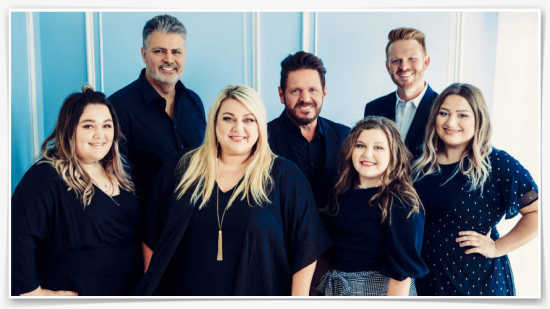 Trinity Assembly of God in Olive Branch, IL will be hosting a Gospel Sing on Friday, Sept. 20 at 7:00 PM featuring the Bowling Family from Nashville, TN.

Perfect blend considering Mike’s vocals are very distinctively similar to those of the late Kenny Hinson. After lending his vocal abilities to several of their high-charting songs, Mike went on to join another successful family group, the Perrys. While with the Perrys, Mike was featured on songs such as "God Sent Angels," "By Faith I Can Touch Him Now," "Not Even A Stone," "Redeemed," "When He Spoke," and many others.

After Mike’s marriage to Kelly, Kelly sang with her family the Crabb Family. Mike spent the next six years traveling as a soloist garnering a tremendous amount of success. In fact, he has been noted as the first Southern Gospel soloist to achieve back to back number one positions on the Singing News Top 80 charts. Kelly spent more than 15 years with her family, The Crabb Family. During that time they were the recipients of three GRAMMY nominations, 11 Dove Awards, 16 number one songs and numerous other accomplishments. Kelly’s unmistakable voice could be heard on the family's hits "Don't You Wanna Go," "Good Day," "Jesus Will Do What You Can't," "Trail Of Tears," as well as singing harmonies on all the others. After the birth of the Bowling's third child, Kelly realized it was time to join her husband on stage as The Bowling Family.

In February 2013, Mike and Kelly’s oldest daughter Hope officially joined The Bowling Family on stage full-time. Many will remember Hope from her appearances as a small child along side her dad on various Crabb Family live recordings. Hope is excited to be sharing the stage with her family and is excited to be following in both her mother and fathers footsteps.

The Bowling Family has appeared on the Gaither Homecoming series concerts and videos, TBN, during Gospel Music Week’s Dove Awards, at GMA’s Seminar in the Rockies and numerous other major events. Their debut release, Faith To Believe, has garnered a record four number one songs ("We Have A Saviour," "Your Cries Have Awoken The Master," "A Miracle Today" and "Notified"), as well as the 2008 Song of the Year ("Your Cries Have Awoken The Master").

The Bowling Family is excited to be in ministry together. They know that all roads have led to this time and this place! God's timing is perfect and they are aware that much work must be done. The world is in need of the Gospel. The power of a song as a tool to reach the masses, once again is witnessed. The careers and ministries that Mike, Kelly and Hope have enjoyed thus far is humbling for them. Life has been sweet. But,oh how sweet is the thought of a young family, a "new" vision, passion and gratefulness for the collective calling, as a family? As long as there is a song and a place to sing it, the Bowling Family is committed to making Gospel music together. With Mike and Kelly’s other two girls, Katelanne, and Gracie, in tow the future is bright, and who knows how many Bowling girls will be on that stage with them in the future!

11 Dove Awards including multiple "Song Of The Year" Dove wins for Country, Southern, and Traditional.

Regulars on the Grand Ole Opry.

Featured on the Gaither video tribute to the Crabb Family (playing on television networks, 2009, 2010.)

The Bowlings are the only artist in Southern Gospel to have four #1 songs on one album (Faith To Believe.)

Performances at Carnegie Hall, Brooklyn Tabernacle, The Potter's House, to name a few.

This group has taken radio and Christian music by storm. They are quickly positioning themselves as the group to watch. As we grow to love this wonderful meld of Crabb/Bowling music our sense of their purpose is obvious. These people love great songs, know how to deliver them, and obviously love God and ministry!

For all the folks that grieved the loss of the Crabb Family. Give the Bowlings a listen. You won't be disappointed.

Pastors extend their welcome to everyone to attend this special community revival and special singing.